We had to buy a skinny Christmas tree and put it up immediately to make sure it would fit. The tree is great, but it has more glitter than I realized.

As usual, the cats were fascinated by watching the tree go up. Stanley immediately began chewing on the branches while I swept up the glitter invasion. Of course, we chased Stanley away from the tree, but we were fighting a losing battle. He just waited until we weren’t looking and began chewing the plastic again.

The next morning, we made two discoveries. One branch has already been yanked down lower than the others from kitty paws standing on it. 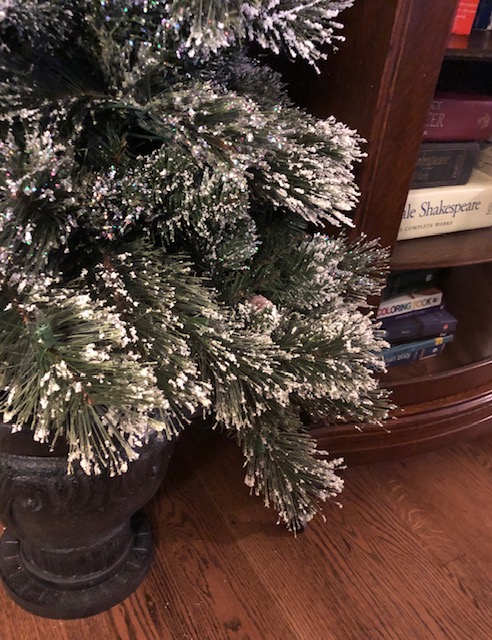 The other was glittery vomit. No, I did not take a picture. I was too disgusted to think about it at the time.

This was not listed in the dangers of second-hand glitter.

Fortunately, the cats have lost interest in the tree for the moment. Unfortunately, we have not decorated it yet. I foresee renewed interest and more glittery vomit to accompany the pulled off ornaments. I’ll let you know.

WordPress.com is excited to announce our newest offering: a course just for beginning bloggers where you’ll learn everything you need to know about blogging from the most trusted experts in the industry. We have helped millions of blogs get up and running, we know what works, and we want you to to know everything we know. This course provides all the fundamental skills and inspiration you need to get your blog started, an interactive community forum, and content updated annually.

Stanely is still determined to get the cat food we hide in the microwave or any other food now that I think about it. He has decided to take a new approach towards reaching his goal. He has taken up impersonating statues.

Sometimes a picture says it all. 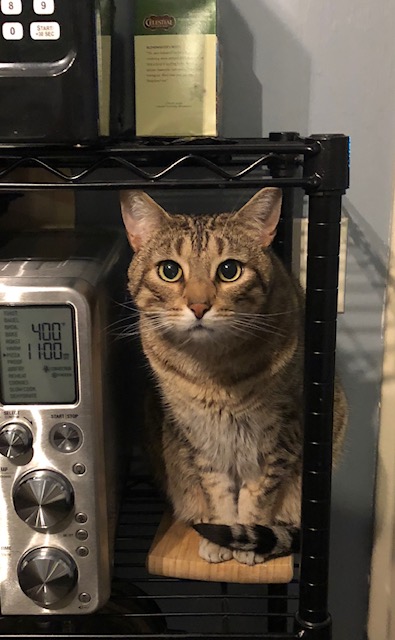 Don’t mind me. I’m just part of the decor.

I don’t know if I should be impressed or horrified.

Note to Self: Wash the cutting board before each use.

Life has been hectic. The normal stress of integrating a new cat was compounded by the realities of having a cat with renal issues. The human worry about Munchkin’s health did not have a positive effect on the cats.

Thankfully, we are now getting the hang of feeding a cat that does not always want to eat, and everyone is starting to relax a little. Stanley has now returned to his clever mischief-making ways.

Since Munchkin doesn’t typically eat complete meals, we keep anything unfinished in the microwave. This decision was made because it is one of the few places safe from pillaging siblings hunting for brother food.

This morning, I heard a loud boom from the kitchen and went running. Instead of a broken appliance, I found Stanley trying to reach the microwave from above. There is a breadbox on the microwave and a marble board on the bread box, so it is not the most stable foundation. His hunt was not fruitful, and Stanley suddenly realized that he was stuck on a wobbly surface.

In typical Stanley fashion, he refused to let me help. I had to use a step stool so I could grab him from above before he took the everything down in his attempt to handle the situation on his own.

He hasn’t attempted the microwave break-in again today, but he keeps staring intently at it.

Stanley’s oldest sibling is his brother, Munchkin. The Munch is a sweet boy who met me at the car one day and followed me home, and he stayed in the yard until we brought him inside. There was no way we could leave him out in the cold.

He is the most beloved cat in the house by other felines. Munchkin is long-suffering and gentle, particularly with everything that he has to put up with from Stanley who thinks that chewing on his siblings’ ears is a form of stress relief. They have their occasional spats, but they love each other.

In fact, the boys and their sister, Betty, have a very close bond. They all love cuddles. Even Yzma has accepted Munch as her brother. They boop noses and enjoy sitting in the window together.

Unfortunately, our little Munch has not been feeling well, and it appears to be his kidneys. He will require a little extra TLC, which isn’t difficult for a cat even vets call sweet.

Stanley knows that something is wrong and has been extra clingy and demanding while I’m working to keep everyone calm. He does not handle change well; so we will see what happens. Hopefully, the treatment will help our baby feel more like himself and give him better play time with his siblings. We are just trying to enjoy our time with him for now.

I’ve been radio silent for the past few weeks because we added a new member to the family. Stanley now has three siblings. To make a long story short, Yzma needed a new home quickly and we fell in love with her. Just look at the precious floof.

We expected a difficult introduction. Stanley vacillated between swearing at me and begging for love for the first couple of days.

Still, the first two weeks went better than we thought they would.

Unfortunately, things quickly regressed when Stanley saw her show me affection. Sibling rivalry turned him into the bratty brother who was always standing just close enough to make her uncomfortable. He stressed her out, which made her react to all of us.

Our family is now in the process of reintroduction. Yzma has a safe space with her own bed and box, and she is much happier getting individual attention from her humans without the creepy stalker cat around. We are rebuilding relationships one sibling at a time. Yzma and Munchkin are great together, and she is growing more confident with Betty. The last hurdle will be reintroducing my problem child.

Does anyone have Jackson Galaxy’s phone number?

I will soon begin a new job that seems like a great opportunity. My excitement, however, is tempered by haunting memories. The new career will require me to spend more time out of the house and away from my furbabies. Stanley was still under a year old when I last spent this much time away from him. He did not react very well to the change. If my boy could destroy something, he did. He was particularly fond of raiding cabinets and drawers.

He was also unapologetic.

What? You left me.

After he adjusted to my schedule, Stanley was always excited to see me when I came home. He would run to greet me. Sometimes it was out the front door and up my leg.

I expect to have some very unhappy cats in the next couple of weeks. Let’s hope that Stanley’s age and siblings will temper his behavior…

Who am I kidding?

When Stanley was younger, he and our other cats managed to break into the middle of our bed’s box spring. He thought it was the best hiding place for any “treasures” he found since we couldn’t reach inside. One night, I was home alone and woke up to a strange sound from the kitchen. I was terrified until I saw Stanley running with my rice cakes. These were not small, snacking rice cakes. They were the old-fashioned frisbees I used to put almond butter on. I jumped up and chased him around trying to get my lunch back, but he was determined to keep his treasure and dragged them up inside the box spring. I gave up and went back to bed.

We got rid of the box spring a few months later and found various items while taking it outside, including the empty rice cake bag. There was no trace of the rice cakes. I’m still not sure whether he ate them or broken them down into dust playing with them.

So, I haven’t been feeling well lately. I’m not sure what I caught, but I’ve spent most of my time on the couch the past few days. Fortunately, Stanley and his siblings have been devoted to my wellness. He has stayed by my side, but I think he is ready to get back to his regularly scheduled playtime.

I am so bored.

Stanley was a rambunctious kitten. Ask anyone who knew him back then. He was everywhere and always ready to play. When we first got him, we lived in a shotgun duplex with a tall swinging door between the bedroom and kitchen. He loved to sit on the top of the door for two reasons: 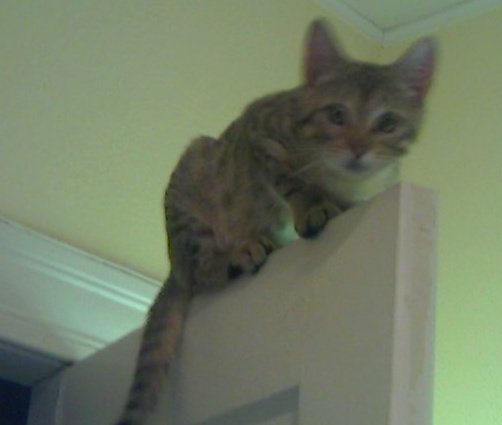 If you walked under the door, you would feel a swat on the back of the head. Only the brave dared boop back.

Stanley does not knock over the trash like a normal cat. Since he is so long, he manages to peek inside and grab what he wants. As you can guess, standard garbage cans are treat and toy bins for him. A few years ago, we bought the type of trashcan that requires pressing down on the lid to open it, and it seemed to keep everything where it should be, for a while.

Suddenly, I start finding random items from the garbage, such as used dental floss,  throughout the house. I began to question whether or not I threw them away. We finally caught our darling boy standing on his hind legs and pawing the lid of the trashcan until it opened.

We now have a heavy-duty metal container that you open by stepping on a pedal. Stanley is not pleased and seems determined to find a way inside.

I will not be defeated.

I wonder how long this will last. Any bets?